Best fighter jets in the world

Three years ago Lockheed Martin’s F-35 might not have even made the list. Its development was behind schedule, over budget, and plagued with technical problems to the point where the New York Times called it “dysfunctional.” However, since then the F-35 has been climbing to the top of the fighter jet pyramid.

So, what breaks the tie between the F-35 and the F-22 Warrior asked the pilots?

“If I have to go to war, I'm going to be in an F-35,” Chris “Worm” Spinelli, F-35 Test Pilot, Lockheed Martin told Warrior. His colleagues agree. The deciding factor for them, and the reason the F-35 is the most technically advanced jet in the world today, is Situational Awareness (SA).

“The biggest, game-changing difference that I've seen…is the F-35’s fusion and integration of all of the different sensors from the aircraft,” Spinelli told Warrior. “It brings together a holistic picture that's quite amazing.”

A key element of the F-35’s advanced SA technology is pilot experience. According to Lockheed Martin’s test pilots, the jet itself is “easy” to fly. This allows the pilot to devote more concentration to the cohesive battlefield picture presented on a touch-screen display in the cockpit. The pilot is able to see everything from basic flight metrics to advanced sensory data and is able to customize the display in real time. Furthermore, each helmet also has a customizable display that is networked with the F-35’s avionics.

The F-35 is compatible with the latest air-to-air and air-to-ground missiles, including the AIM 9X SideWinder and the Storm Shadow weapons systems. However, its pilots note that perhaps the mark of a truly advanced fighter jet is being so many steps ahead of the adversary that it never actually needs to fight.

If it is surpassed by the F-35, then the F-22 Raptor easily earns a second place. The stealth, speed, and maneuverability of the F-22 set it apart. It can reach a speed of Mach 2.25, or 1,726 mph, and features a Triplex fly-by-wire system and thrust-vectoring technology.

“The F-22 has given us thrust vectors and there's not another US fighter anywhere near as capable as an F-22 at performing drastic maneuvering in the high airway regime,” Chris “Worm” Spinelli, F-35 Test Pilot, Lockheed Martin told Warrior.

Highly advanced stealth technologies also define the F-22. Its design features edge alignment, serpentine bends, and angled vans to reduce its radar and plain-sight visibility. The F-22 also has the ability to reduce its infrared signature through its flat thrust-vectoring nozzle technology.

Significantly, the export of the F-22 is forbidden under U.S. Federal Law, which could indicate that it has added new technology that remains confidential for national security purposes.

The true performance capability of China’s Chengdu J-20 fighter jet is known only to the Chinese government, but the information that is available places it high on the list of advanced fighter jets.

The J-20 reportedly carries more weapons systems than the F-22, with an internal weapons bay and two side bays for both long and short-range missiles. It is equipped with retractable missile launchers that can slide out on rails and then stow away to reduce the jet’s radar profile. Additional stealth is achieved by the J-20’s integrated fly-by-wire system and through its ability to power the engine on low intake, which reduces heat signature. 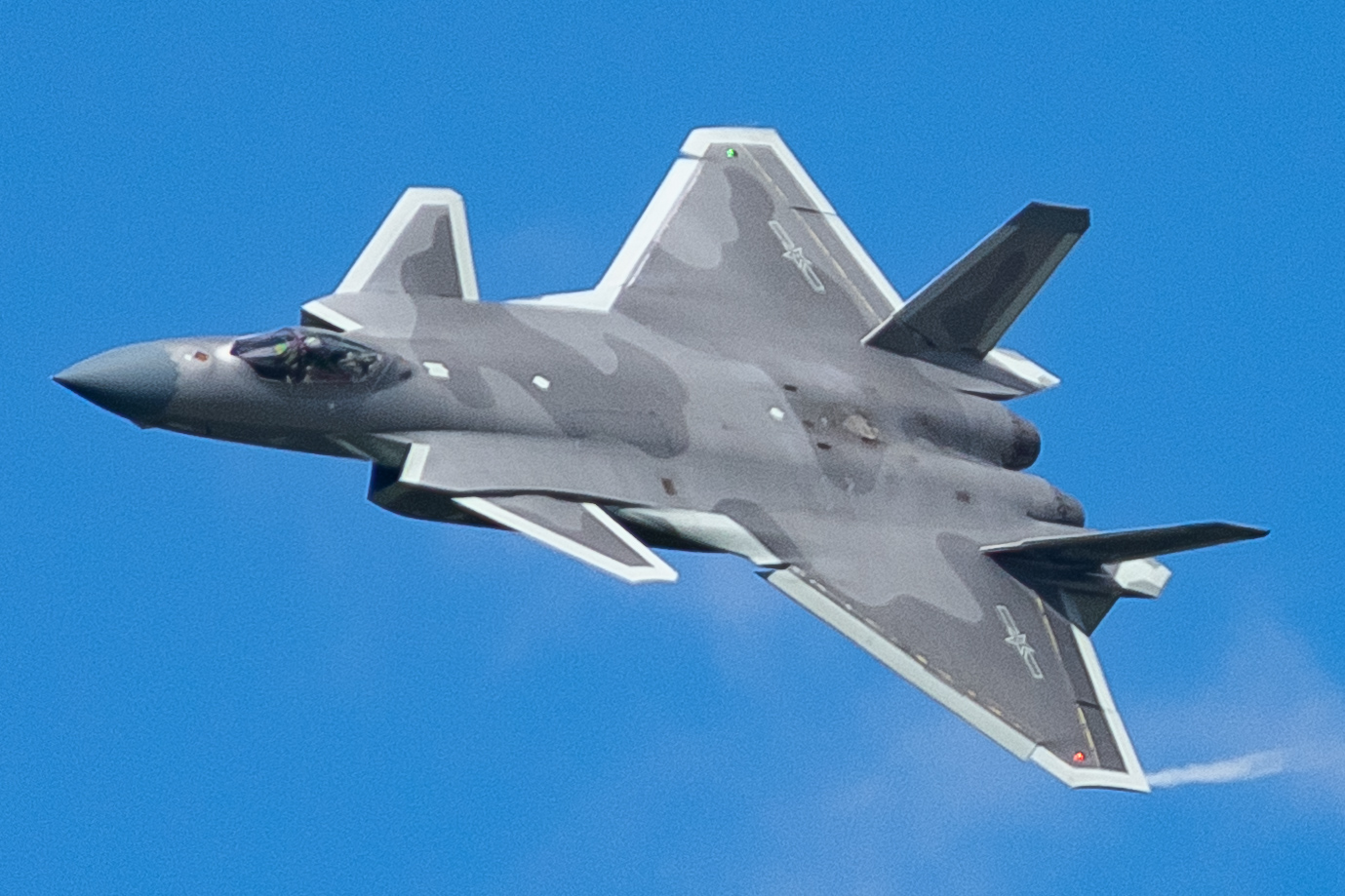 While China claims the J-20 is capable of speeds slightly over Mach 2, there has been some discrepancy surrounding the jet’s engines. It was initially reported to use the less-advanced Russian AL-31 turbofan engines, but this year the South China Morning Post reported that the J-20 was being upgraded and equipped with new WS-15 engines.

Similar to the J-20, the Russian Sukhoi Su-57 fighter jet’s placement on the list is determined by limited available information. It is known that the Su-57 has advanced situational awareness technology, which includes AESA radar embedded in the jet’s “cheeks” for a wider range, and onboard infrared search and track technology. It reportedly has a powerful onboard computer and operates using the Sh121 multifunctional integrated radio electronic system (MIRES)-Byelka radar. Along with the F-35, F-22, and J-20, the Su-57 has Electronic Warfare (EW) capabilities.

In terms of stealth, the Su-57 is capable of storing weapons inside its fuselage, reducing its profile. It also has modulated laser technology that can “blind” heat-sensor-based incoming fire. Laser modulating can be accomplished by controlling the laser’s power source or by physically disrupting the laser through acoustic vibration or other means

Although highly advanced in many areas, the Su-57 is thought to employ the Saturn AL-41F1 engine, which is a slightly older model. 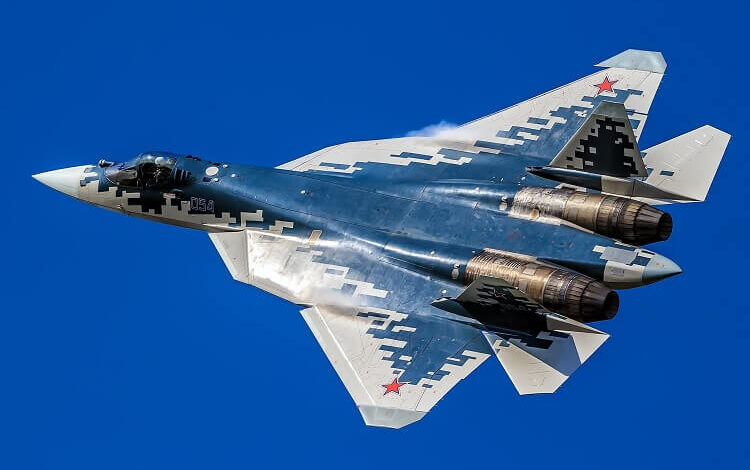 Available reports show that with a top speed of just Mach 1.8, the Boeing F/A-18 Super Hornet is slower than the F-22 and even the J-20, but its efficiency and weapons capacity is still noteworthy. The F/A-18 and E/F versions feature long-range fuel storage capabilities and the E/F has 11 onboard weapons stations for air-to-air and air-to-ground weapons systems. It also has the capacity to carry advanced laser-guided “smart” weapons. However, the F/A-18E/F does carry its weapons load externally, which reduces its stealth capabilities.

Jointly developed by Germany, Italy, Spain, and the United Kingdom, the Eurofighter Typhoon is fast but has room for maneuverability improvement.

The Eurofighter was designed to be a beyond-visual-range capability as well as an air-to-ground engagement asset. It is currently compatible with the most advanced European air-to-air, air-to-ground, and air-to-ship missiles and is equipped with the Euro radar CAPTOR AESA radar.

Reaching speeds of slightly over Mach 2, the Typhoon Eurofighter is reported to be the most advanced fighter jet native to Europe. 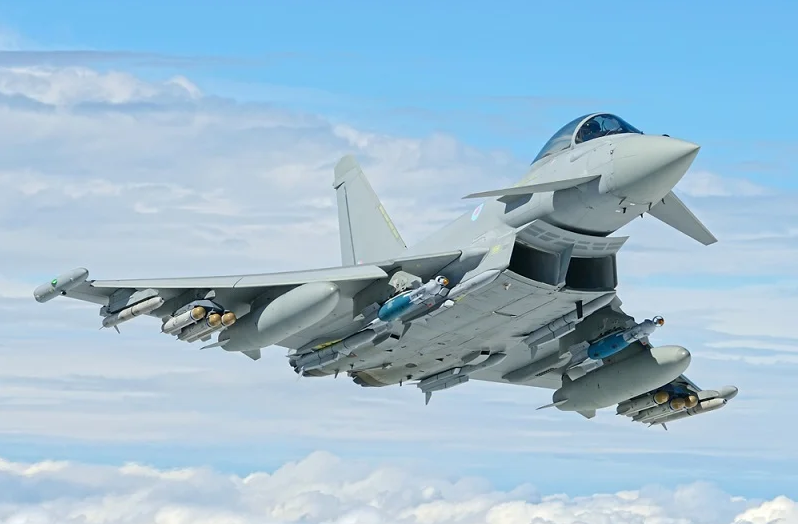 As the fourth U.S. fighter jet to make the list the F-15 is notable for its weapons capacity and speed. Along with the F-22 and F-35, the F-15 E is compatible with the top weapons systems in air-to-air weaponry, including the AIM-120 and the AIM-9x Sidewinder. It has advanced target detection and tracking technology and is capable of carrying up to 2300 pounds of ordinance.

The F-15E has a high thrust-to-weight ratio and as such was the first fighter jet with the ability to vertically accelerate. Faster than even the F-22, the F-15E can reach speeds of over Mach 2.5.

The Russian Sukhoi Su-35 can reach speeds of Mach 2.25 and features three-dimensional thrust vectoring technology that makes this fighter jet both fast and maneuverable. 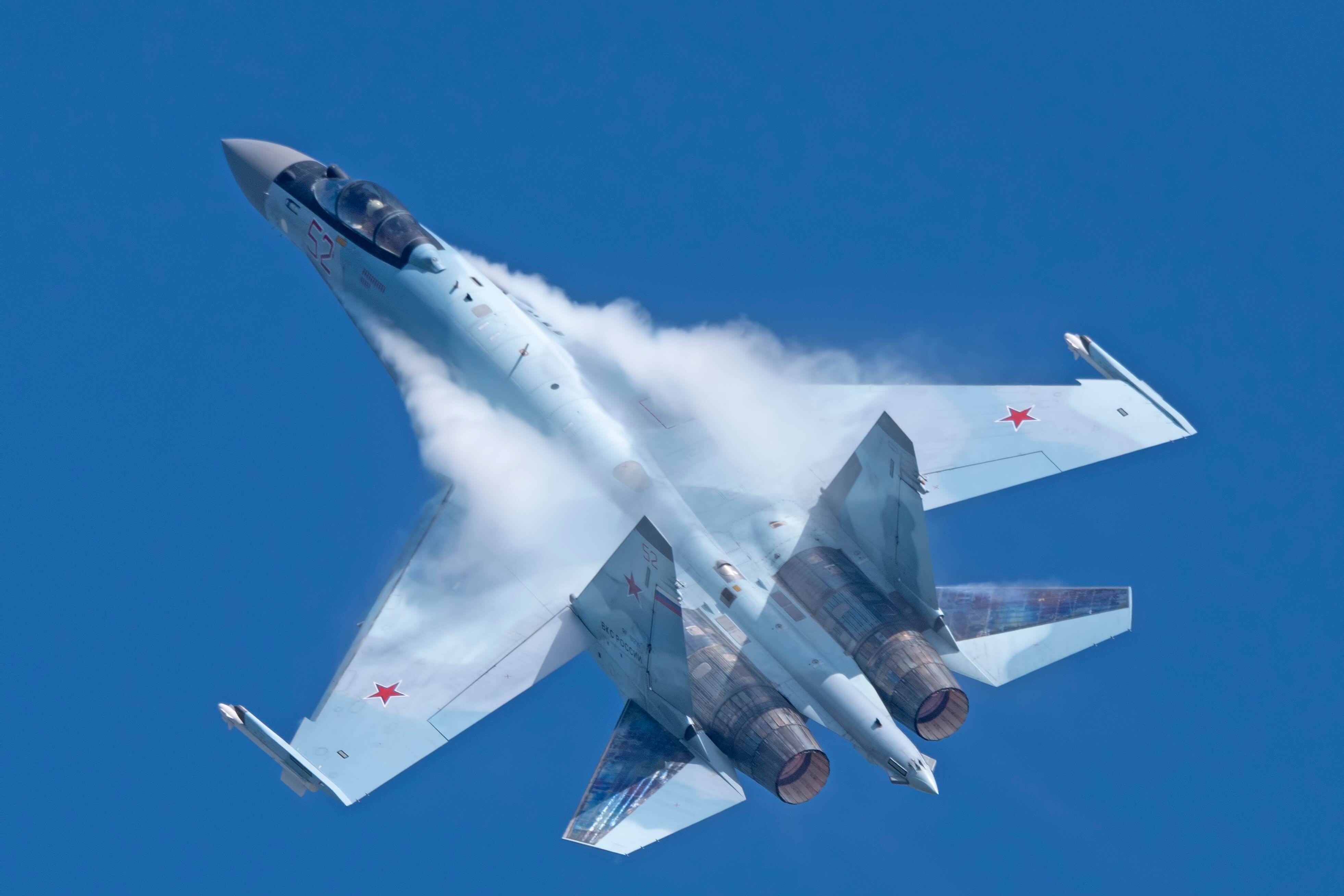 It has a total of twelve weapons stations and can carry more than twice the ordinance of the F-15 Eagle. However, though unconfirmed, it is thought to use the Irbis-E Passive Electronically Scanned Array radar, which unlike AESA radar, can only emit a single wave at a fixed frequency and likely relies on physical antenna receptors.

The French Dassault Rafales’ most significant capability is that its advanced avionics and weapons system integration allows it to track up to 40 targets and fire on four targets simultaneously. As part of this interconnected avionics system, the Dassault Rafale employs the MDPU Thales RBE2-AA AESA radar.

Though reported to be highly maneuverable, the Dassault Rafale only reaches a max speed of Mach 1.8. 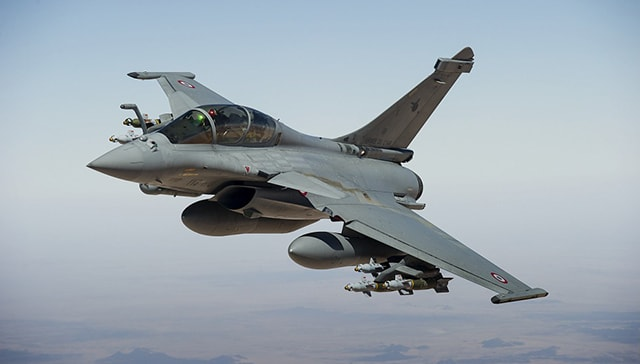 The Swedish Saab JAS 39E Gripen may not be last on this list for long. According to Saab, the JAS 39E is equipped with the most advanced AESA radar and ten onboard weapons stations. Its avionics include Artificial Intelligence (AI) integration components and advanced sensor technology.

For now, it appears that the JAS 39E was designed according to domestic priorities of affordability and Swedish airspace protection, but beyond these bounds, its technology has the potential to impact the future development of all fighter jets on this list. 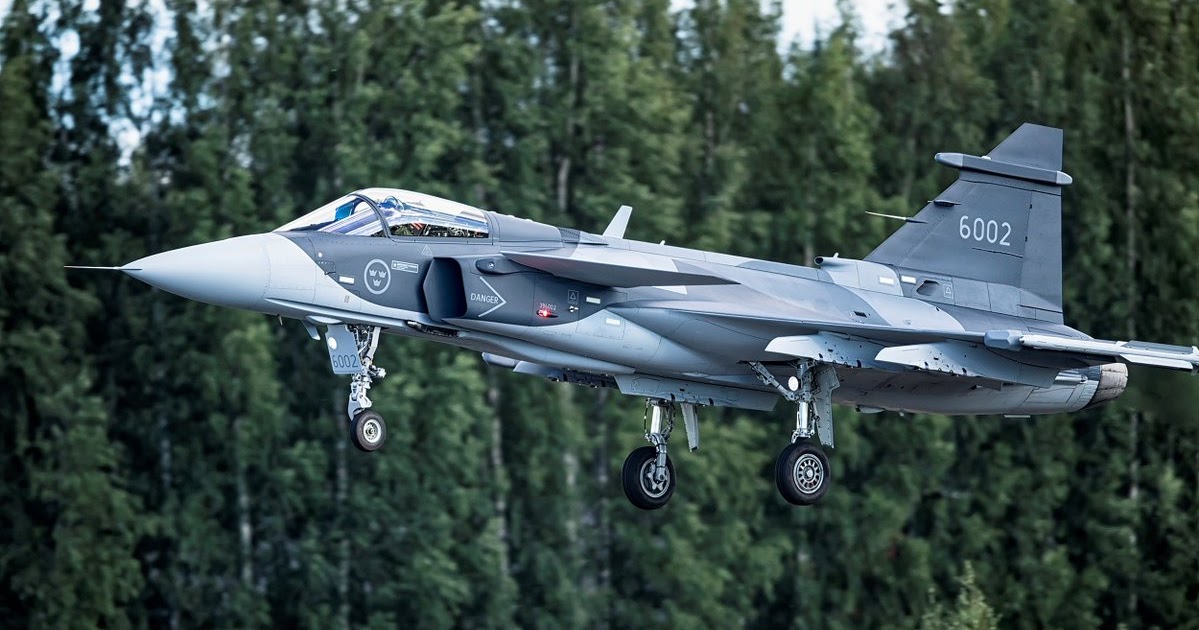 Are you looking for a way to use hypersonic drone-mayhem surveillance? This post will give you an inside look at its ast...

Understanding the size and scale of a nation's air force is essential in understanding global military dynamics. Explore...

We offer different types of options, from business listings to events, classifieds, articles, banners, and much more...

Allsalt Maritime is a design, manufacturing, and R&D firm specializing in marine shock mitigation technology whose mission is to create products that give our customers more days on the water.

Cameras and Vision Systems for Anything that Drives or Flies! Kappa has over 40 years of experience with application-specific cameras and vision systems in rugged and certifiable design – in small and mid-sized series.

+90 3D Digital Factory has the largest 3D printing capacity in the Middle East with more than 10 large format industrial printers with different technologies and materials.

NTG5000 uses two wave ranges of infrared and visible light. it can be switched quickly with one key. It has the ability of detecting in all complex environment.

High Detailed Static Scale Models
in Other Products or Services

Small-scale and ready-to-display model aircraft, ships and vehicles with a high level of detail and %99 identical to the actual sample.

Sign up for our monthly newsletter. No spams, just product updates.